There is no good way to represent a tri-state checkbox in HTML.
I’ve been googling and hacking around today on this topic. We can at best approximate the tri-state checkbox in HTML, and the methods I’ve found have their pros and cons. I will offer a pure CSS method, which too has its pros and cons. All require some javascript in order to function.

Here are two examples that simply use images to represent the various states of the checkbox:
http://shamsmi.blogspot.com/2008/12/tri-state-checkbox-using-javascript.html
http://plugins.jquery.com/project/tristate-checkbox

In this suggestion, Pau Moreno offers to dial down the opacity (like gmail does somewhere?) to represent the “mixed” state.
http://stackoverflow.com/questions/1726096/tri-state-check-box-in-html/4724216#4724216

This is my suggestion, which uses only native HTML checkbox and CSS. Here is a prototype with some hardcoded jQuery.
http://www.gentomi.com/tri-state-checkbox.html
Here’s what it looks like on XP. (From left to right: Chrome, Firefox, Safari, IE8) 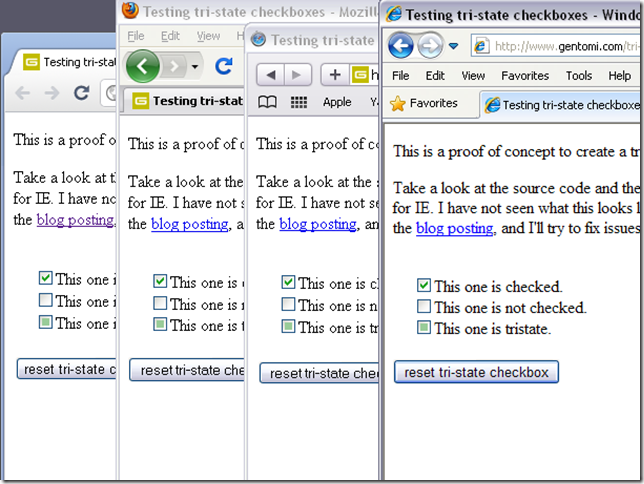 You’ll have to look at the sources and stylesheets. Basically the input tag is followed with a couple of inline div tags which use the CSS relative/absolute position attributes to position a 7x7 green div square atop the checkbox to its left. It is just CSS. The javascript has to interpret the click event on the 7x7 square and “click” the checkbox.

I’d like to hear some feedback from you, specifically if you see inconsistencies in the demo on other browsers/platforms.

First, for the image-based solutions, I found another implementation (by Ryan Morlok) that covers the 12 cases I wanted.  http://softwareblog.morlok.net/2010/06/20/tri-state-checkbox/
Second, a friend sent me a screenshot of the CSS proof of concept rendered on a Mac. (From left to right: Chrome, Firefox, and Safari) 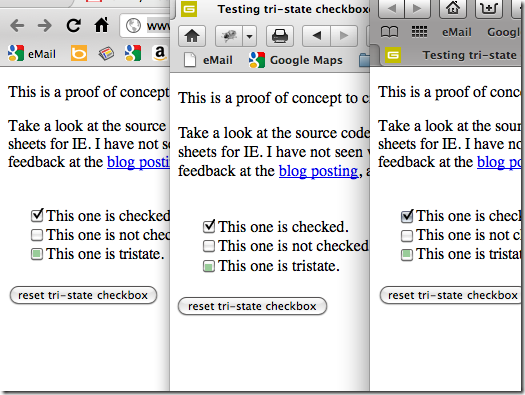 Clearly, separate CSS styles would need to be maintained for multiple platforms, in addition to multiple browsers.
Also, some googling revealed to me that to Mac users, a native tri-state checkbox is rendered with a “dash” rather than a “square”. This is possible to emulate since it is just CSS. Instead of a green 7x7 square, it would be a black 6x2 rectangle.
I also tried loading the proof of concept page on browsershots.org and found many of the unix platforms render the square in the wrong place as well. I’m not surprised.
I’d say this is a big issue for the “Cons” column. The number of platforms and browsers are large, but finite, and you could design the code to minimize the pain of adding new platform/browser offset information. But actually doing the legwork to maintain these nuances is very difficult; even with testing platforms like browsershots.org (and its contemporaries) getting this “just right” is still difficult. But if someone did maintain it, then I think I would really like this solution.
Meanwhile, I’ll vote for any future HTML standards that include a tri-state checkbox.
Posted by SendTree at 1:06 PM